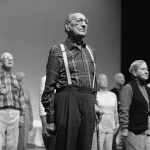 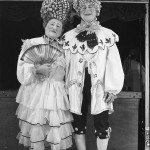 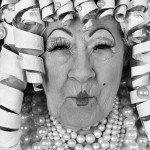 You need to suspend all stereotypes when it comes to the Young@Heart Chorus. Though the costumes you see in these images may seem ridiculous and overblown, the songs they sing and the feeling they convey are far from what you’d expect.

My parents became members of the chorus when they moved from New York City to join my family in Northampton, Massachusetts. Nothing in particular had distinguished their lives before—not education or careers, though they had both been active and contributing members of our community. Though both my parents are gone now, I know they would say that their lives became more interesting, richer, and more fun when they moved here, with their grandchildren and chorus members fully engaging them.

Once my parents became involved with the chorus, I began to photograph them regularly and became the “official” documenter of their performances and backstage preparations.

The best part of photographing chorus members is how I have felt: engaged, turned on photographically, and turned on emotionally. Audiences feel warmth from this group, and they have a unique artistic offering as well. Their baby-boomer director has pushed them to go beyond singing standard songs to embracing music of the sixties and beyond. Their shows are well constructed and surprising, not just a list of songs. An important aspect of the experience is that members are ordinary people, not necessarily having had a performance background. They’re polished, but down-to-earth and accessible.

For my parents, I know that the regular rehearsals and performances were incredibly important. They were proud of their involvement, and at an age when sitting on the couch may be a large part of the day, they were singing, meeting new people, laughing, standing up straight and using their lungs, performing creative and demanding work . . . and staying active.

Ellen Augarten is a long-time portrait photographer based in Northampton, Massachusetts.  She has done large projects on the topics of pregnancy, self-portraits, Serious Play Theatre Ensemble, Young@Heart Chorus, and Psalms in Ordinary Voices. Her current photographic passion is “Doubles,” seeing the everyday world in double exposures. Her work has appeared locally numerous times, and at exhibits in Washington, DC, Connecticut, California, and elsewhere. Readers may write to Ellen Augarten at ellenaugarten@gmail.com.