My aim is to help shift attitudes towards older people. After all, this is a demographic that should be celebrated, nurtured, respected and “seen,” rather than invisible. Many older people have witnessed key historical events and can offer invaluable insights, important reflections, and incomparable first-hand experience, which I believe should be documented as much as possible through photography, oral history, and other arts initiatives. I also hope my images will empower older people to express themselves and to be creative, confident, and proud of their unique stories and wealth of experience. I now document artists and creative figures over sixty, as well as people who attract my attention in the street. My aim is to produce a blog that celebrates the diversity, wisdom, individuality, and inspiration that is in abundance in the older generation. I find my shoots and interviews with older people thought provoking, creatively stimulating, and often life-affirming, and this inspires me to continue documenting older people. 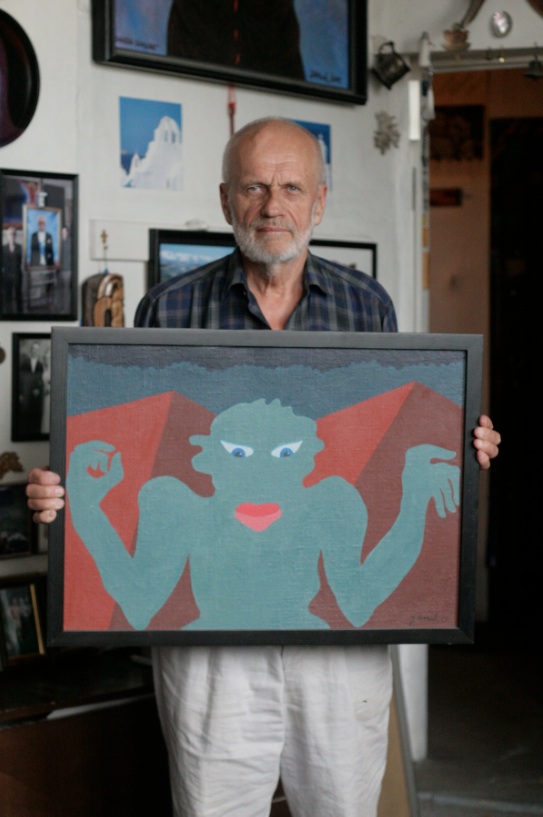 My first image is that of Estonian painter Juri Arrak, photographed in his studio in Tallinn, Estonia. Juri is well known throughout Estonia, and he has recently been commissioned to paint the president’s portrait. However, it was through his 1970’s children’s books and illustrations of  “swamp women” that I came across him. I met him on a whim whilst I was passing through the city, and I was thrilled to be invited to his studio, where he has created artwork since the 1970’s. Juri has a very set routine. He goes to his studio daily and even at age seventy-seven, he insists on continuing to paint each day and on climbing the 110 steps to the top. He told me that he never thinks about his age and that he plans to keep creating until he is no longer able. He also told me that the notion of retirement was alien to him; he believes that “everyone needs a problem to solve.” 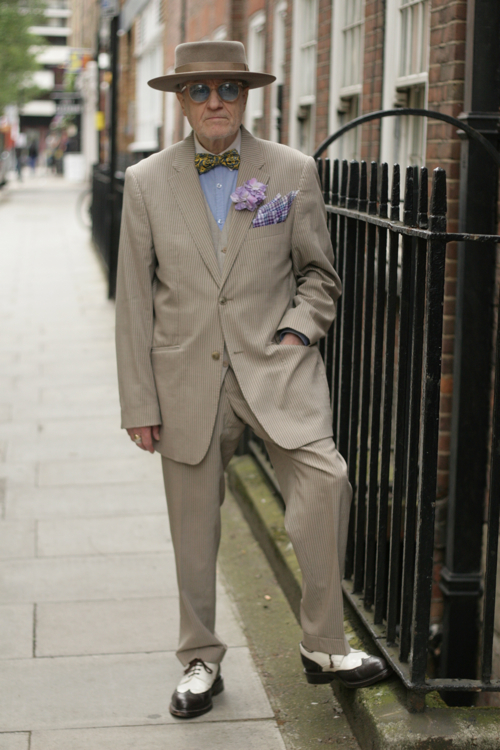 In a similar vein, the second image is of George Skeggs, who describes himself as a  “surrealist artist.”  I found him, at age seventy, on the streets of Covent Garden, where he told me he has lived since the 1960’s. Charmed by his highly individual style and dapper demeanor, I was thrilled when he agreed to let me photograph him, telling me it actually happened to him every day. George also informed me that he doesn’t think about his age and that he believes he has led a “blessed life” because of the “gift of creativity.” He also told me that he didn’t ever follow fashion—“I never get inspiration from anywhere,”—relying instead on his own creative instincts about how to dress. He ended by saying, “Creativity is the only answer.  It makes you glow in the dark and in the daylight.” I got the impression with both of these subjects that creating their artwork helped them approach aging in a healthy and positive way. This consistent strand of creativity running through their lives acted like an anchor, providing them with meaning, purpose, and also a sense of continuity, equipping them with a healthy indifference to societally conditioned expectations surrounding age.

Ali Winstanley is an artist working with collage, illustration, textiles, and photography. My photography practice focuses on capturing unique and distinctive people and their stories.

She developed an enthusiasm for documenting older people with a unique sense of style, vivacity, originality, and flair, as well as recording their stories and attitudes to age, style, and creativity, whilst living in Berlin in 2008 and traveling to many interesting corners of Eastern Europe.

In 2012, she started to collate these images on her blog, The Luminous Eye, and also moved towards working in community and therapeutic settings. Whilst assisting with arts projects in care homes with people with dementia, she took portraits of participants in an attempt to capture their palpably individual characters and spirits, and participants reacted very positively.

Her images of older people have been used by The Guardian as well as in the recent book How to Age, by Pan Macmillan, and presented at the “Addressing the Ageing Demographic” conference at the Royal College of Art. She has also been commissioned on contemporary street style shoots around Europe for publications such as Vogue, Elle, The Independent and The Telegraph. She aims to work in further community settings and also to persuade more high-profile publications to feature images of older people, so that it becomes far more normalized to see this demographic in mainstream media.

Readers may write to Ali Winstanley at aliwinstanley@gmail.com.